Keeping an Eye on Accotink Creek 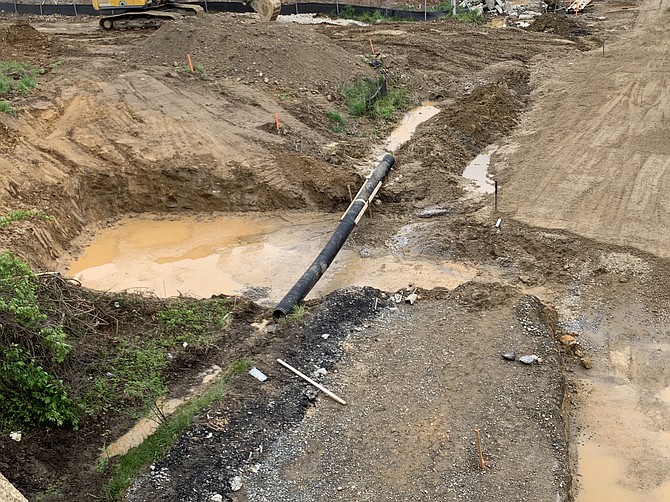 Muddy waters in the project area.

When the Friends of Accotink Creek looked at the muddied waters downstream from where it goes under I-66 in Fairfax County, they brought the

According to the Potomac Riverkeeper Network, “VDOT ‘fixes’ were not adequate,” they said. The group keeps an eye on this kind of thing and are working with the Friends of Accotink Creek to make sure the creek is protected. Dean Naujoks, a Potomac Riverkeeper at the Potomac Riverkeeper Network, is part of the effort, and said that “sediment pollution is number one source of water pollution in the country,” along with phosphorus, a leading cause of impairment to the Potomac and its tributaries and Chesapeake Bay. “One of the goals of Chesapeake Bay Clean Up is sediment, nitrogen and phosphorus,” he said, “phosphorous attaches to sediment to use as a transport.”

According to Naujoks, projects are supposed to have National Pollution Discharge Elimination System Permit for construction run off that requires VDOT and its contractors to ensure sediment pollution does not leave the construction site. The site is also supposed to use best management practices, properly maintained and functioning, so that no polluted runoff reaches the Accotink or the Potomac.

The Friends group urges supporters to loosely monitor things along I-66. “Although we were unable to hold the asphalt at bay or even to have current stormwater controls applied to this project, let's all keep our eyes on it and hold VDOT and contractors to standards the citizens and environment of Virginia are entitled to expect,” their website states. “Friends of Accotink Creek: ALL EYES ON I-66! - UPHOLD ENVIRONMENTAL STANDARDS!” it reads.

Kris Unger, a Friends member, was discouraged with the level of accountability with VDOT and the elected officials when the issue was brought up. The I-66 project spans several miles and “we only went to one spot on one day,” he said, noting that the sediment runoff problem could be more widespread than originally thought. In mid-April, representatives from VDOT did answer his email though, and told him an action plan was in the works.

VDOT acknowledged the concerns from members of the Friends of Accotink about possible sediment discharging to a stream located near the end of Ranger Road in the Mosby Woods Subdivision in Fairfax City following heavy rainfall in Northern Virginia and the entire region occurring on April 12 and 13, they said. The I-66 Outside the Beltway's design-build contractor, FAM Construction, is required to install and maintain erosion and sediment controls throughout their construction area to protect streams and the surrounding environment from rain and other weather events during construction. FAM’s team, as well as the VDOT team, inspects these erosion and sediment controls regularly. Unfortunately, the controls could not withstand the significant rainfall that occurred during the referenced rainstorm, resulting in the concerns that were raised, the VDOT’s Megaprojects Office said.

Following this complaint, an on-site inspection was held on Friday, April 17, and a follow up visit was conducted on Monday, April, 27, resulting in confirmation from DEQ that all needed corrective actions were taken to address concerns about this stream.

The project at I-66 isn’t the first time the Friends of Accotink Creek have been concerned about sediments in the stream. When the I-495 toll lanes, loosely called “HOT” lanes at that time, were under construction, the stream took a hit then as well. The Friends note that incident on the website: At a June 2017 meeting, the Friends of Accotink Creek, objected to tree loss without mitigation, outdated stormwater control standards, and considering transit as an afterthought, rather than a leading element in any transportation project, they said. Unger was involved at that time also and felt there wasn’t enough discussion with the authorities.

"We would like to point out that four years after completion of the 495 Express Lanes, we are struggling to correct erosion control and landscaping shortcomings that did not meet minimum standards. We fully expect to face the same situation with the I-66 Express Lanes," the Friends website stated after the June meeting.

The Friends of Accotink Creek group has reached out to Virginia Senator Dave Marsden (D-37), Del. David Bulova (D-37), and Fairfax County Supervisors Dahlia Palchick (Providence) and James Walkinshaw (Braddock), but has yet to receive a response.